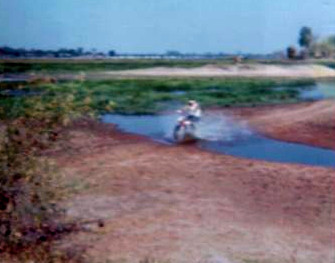 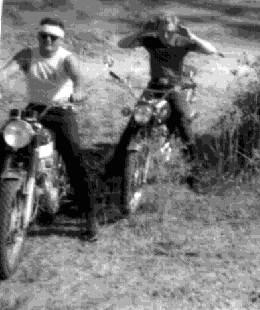 Let me set up the storyline it’s 1969 in Northeastern Thailand just a mere 20 kilos north of town at what I’ve learned was a dual purpose base.

In the early 1960s Camp Khon Kaen became home to the 201st Signal Detachment with huge 300’ 50 kilowatt Marconi Antenna the locals called it Hawsip Kilowatt (50 kilowatt). In 1967 the site was expanded to accommodate a new trailer transfer station for the 519th Transportation Battalion.

I arrived in Thailand in February 1968 as a truck driver hauling supplies to army and air force bases throughout northeastern Thailand. I met and later married my wife in Khon Kaen in 1969. Shortly after we married I purchased a Honda 125cc motorcycle and began riding with a small select group of GIs of which one earned the nickname of Easy Rider. Over a 6 month period I have many memorable incidents riding with Sergeant Don Way (Easy Rider) and SP4 Everett Cole.

Our rides were across rice paddies and paths that weren’t large enough to be called cart paths. We usually traveled in pairs and had no fear of insurgents or “bad guys” as we stopped in places that were so remote and many of the locals had never seen a fair skin, red headed falong (foreigner). As we stopped to assess where we were or where to go next the kids came literally out of nowhere. We had no trouble communicating as one universal word “Pepsi” always brought a smile and results. For 7 ½ cents (5 baht) we got a bottle of soda, poured into a sandwich bag of ice and a rubber band to hold onto.

One ride was with Sergeant Way and myself (don’t remember where Cole was) we were riding along a path between two rice paddies and crossing over a small irrigation ditch with me in the lead. I stopped to wait on Sergeant Way’s bigger Honda 250cc to clear the ditch when it suddenly got eerily quiet. I looked behind me as I heard the engine go “glug glug” and died completely submerged in water. I rushed back to help him push the bike out of the water and back onto the path. Soon Sergeant Way had his tool kit out and was unbolting the exhaust pipes to drain the water. He kicked on the kickstarter a time or two to turn over the engine and insure no water was inside. He then put everything back together fired it up and we were back on the move.

How Sergeant Way earned the nickname was when his wife Lek was in the Udorn Royal Thai Air Force Base hospital for an appendectomy and he was on his way to see her. Udorn was about 60 kilometers north in the town of Udon Thani. It seems that someone had a water buffalo that turned abruptly across the road in front of the motorcycle. The impact killed the water buffalo and broke both Sergeant Ways collarbones sending him after surgery into the same room next to his wife.

My wife (Montian) and I went to see them at the hospital and on the way back while passing a gasoline truck at 80 kilometers per hour (50 mph) our rear tire simply went flat. As the bike left the roadway it laid down, depositing my wife on the shoulder while I continued down into the ditch. We were both bruised a bit and the Thai police officer riding guard in the gasoline truck came over to check on us and help me get the bike back up to the road. A visual inspection showed the valve stem had sheared off from the tube. We ended up loading the bike and ourselves in the back of a small pickup (bus) that took us to the tire shop along the road at Nong Khai. Getting the tube repaired by a resourceful mechanic had us back on the road in about an hour and we headed back to the village where her folks lived in Khon Kaen. I’ll write more about our rides later. – I am the Real Truckmaster!