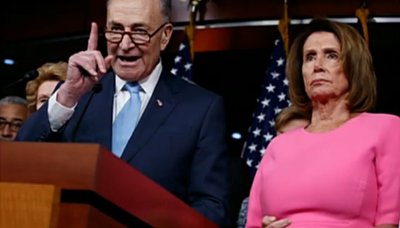 I know that many of you are not happy with my posts. You wish I would simply stop writing and that is your prerogative. It is my intention not to attack but to reveal the stupidity exhibited from the liberal left and given voice from the Democrats in Congress or in the Main Stream Media (fake news).

I try to educate the reader with facts that are sometimes too subtle to see and even harder to recognize in order to present a clear picture of what is happening in American politics today. I think of it this way if Congress were an insane asylum and all the residents were screaming to get out, whose voice would be the loudest to be heard? Who would be the most believable? Who would care?

We’ve all heard the fairy tale of the boy who cried wolf so many times that when he actually saw a wolf and tried to tell the towns people nobody believed him. That is what keeps coming out of the mouths of those in political power within the halls of Congress.

The current Speaker of the House of Representatives is Nancy Pelosi Democrat from California with 30 years in Congress. During a recent meeting with President Trump (when she was the Speaker-Designate) she tried to tell the President not to under estimate “her” importance at that meeting which went nowhere. After her taking the gavel she has not shown leadership in the house. She remains like the boy who cried wolf only she is crying “no funds for Trumps wall”. Even then the House passed a bill to fund the wall, but it failed to pass in the Senate because of the Minority Leader Chuck Schumer Democrat from New York with 19 years in Congress.

Every time the President asks for Congressional funding for the wall, the Democrats simply stick with the word “No” as noted at yesterday’s White House meeting of the Democrat leadership with President Trump. Not wasting any time President Trump simply ended the meeting and left the room, which took both Pelosi and Schumer by surprise. Did they think Trump would sit there while they groveled and barked their demands and ignored the elephant in the room (funding for the wall)?

It amazes me that prior to become President, Trump, Pelosi and Schumer were all friends and all were Democrats. Let that sink in for a minute or two. The powerful looked for ways to have their pictures taken with the rich and famous and he greased many a Democrat campaign fund.

How soon they forget a simple yet most important fact of life – You can’t “out trump” Trump. They simply don’t know jack about “The Donald” or as he is now known – Mr. President! – I am the Real Truckmaster!