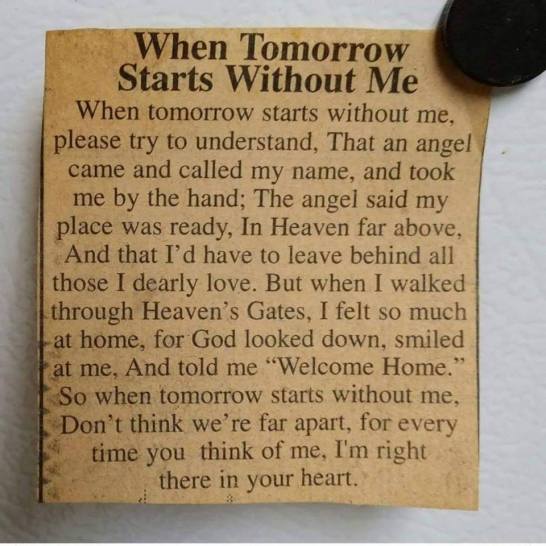 During the last four or five years I’ve had a number of people close to me suddenly cross-over, die, or pass away (pick one). I’ve seen it all, or so I thought. Suicide or natural death they are still gone. Some have been family members (close and distant), while others have been friends I’ve known my entire life, or close friends who are here today and gone tomorrow. The saying that no one’s an island is perfectly true. We may think we deal best when we are alone, but that’s not how we were created.

I don’t think I’ve let myself grieve for any of those I’ve lost. I mean they’re not really lost, they either went up or down and at times the choice rests with those who couldn’t deal with life and chose a way out that is not really out of anything.

Some went gradually through the process and disease of Alzheimer’s and Dementia. Those were the hardest to deal with and see them virtually and gradually losing a grip on the world as we knew it. The final weeks and months seemed to drag by, but in hindsight were not quite long enough.

At mom’s funeral I found myself with no words to say. For once I was speechless and for those who know me it’s not normal. I usually have something to say about everything and I’m not afraid to give my opinion at the drop of a hat. More recently at dad’s funeral I was like the host, guiding the service along and basking in the memories from times gone by. When I’d pop in at the Veterans Home I’d often tell the nurses and staff that he’s my brother. Our glasses were the easy way to tell us apart (accept he was a bit older than me if they took the time to see). I’ve had aunts, uncles and cousins passing in different states and I guess that’s to be expected as death is a part of life.

I can’t forget the phone calls, the first one from a friend who came home from work and found her husband’s body. The two miles took me almost no time and I ended up following local fire and rescue to the house. I didn’t go inside, but watched from the driveway as they brought him out. It’s not real unless you get closure. Closure came at the funeral home in his home town, the church service and burial. That’s when it really sunk in he was gone. The second call was from a detective asking if I knew the deceased. Not giving the cause of death, just my business card was on his computer desk and no family info. I had to go through possessions, return a recently purchased car to the bank and arrange for the body to be buried at the national cemetery in Denver, just so surreal. Another was about a high school buddy who passed away back home and his wife called to let me know. The most recent was yesterday and I’m not sure I’m handling it very well. A friend whom I had talked to infrequently the past couple of months and the call said she passed at home. There have been others that I have come to know over the years and some through online veterans groups with an exchange of emails, pictures and an occasional chat session and then nothing.

There’s really nobody to sit down and talk to about them when after it happens. My military training has me compartmentalize things, people and places once they are no longer around or in my life until we reconnect at a reunion, along the freeway at a truck stop or during an unexpected surprise visit.

They say that it’s normal to talk to yourself and I do that a lot now days. They also say when you start answering yourself it’s time to go see a doctor or something. I don’t really believe that because I’m pushing 70 this year and I see my doctor(s) at fairly regular intervals.

The kids are all grown and have kids and grandkids of their own, yet they call or pop in just to see if my blood pressure is normal. They know what buttons to push if the BP needs elevated.

The wife is working still and her little old ladies and their hair keep her hopping like crazy and she has an occasional customer who passes away and she’s coping with them.

The one I can always count on under all circumstances is God. Maybe I haven’t made the best use of calling out to him like I should, but I know that he hears me when I call. I know that because he hears me he answers my requests, sometimes with a funny twist. His answers are not always what I ask for or when I want it, but it is always at the right time and according to his purpose and schedule for my life. – I am the Real Truckmaster!