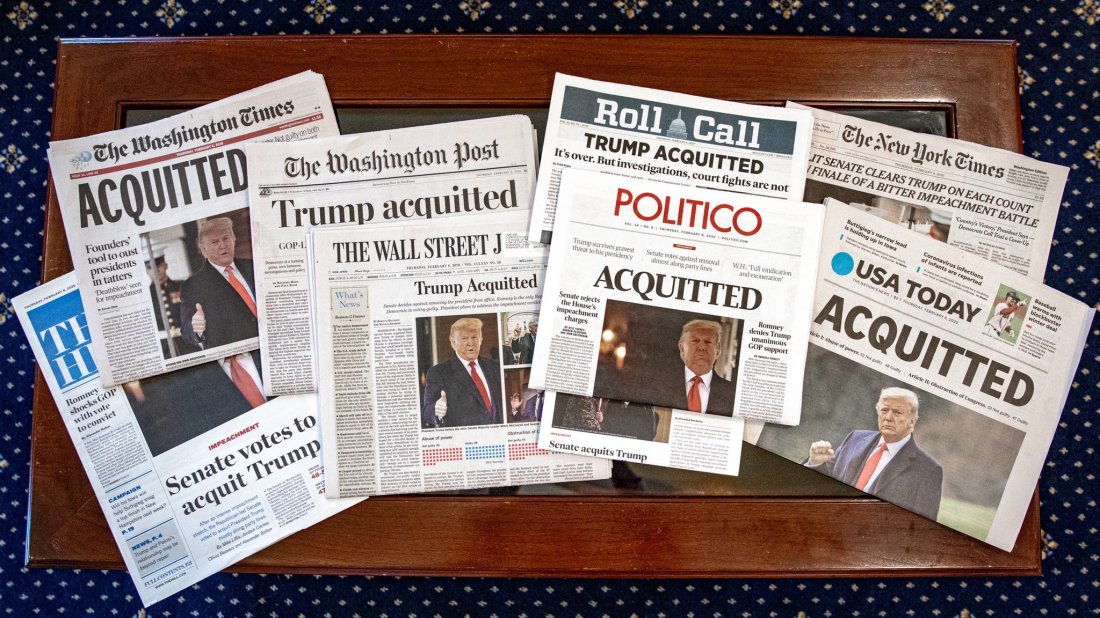 History will record the year 2020 as the year that changed American politics with the House Impeachment of President Donald John Trump investigation phase held largely in secret in the basement bunker. There were witnesses and documents and the nod to proceed was given by Speaker Nancy Pelosi without the required full vote of House members and without allowing any defense of the man being accused. In fact there were no impeachable charges, simply third party hearsay and he said, she said. Much of the evidence rested on the mindreading and wordsmithing of Committee Chairmen Adam Schiff and Gerald Nadler. The entire process was flawed and the principle characters in this process accused President Trump of the very things they were attempting to do to him.

The veiled Coup began under the guise of threats of impeachment for President-Elect Trump and before his inauguration as the 45th President of the United States. It was then announced publicly as a media headline just 19 days after Trump’s inauguration.

We began hearing rumors of Russian interference in the 2016 Presidential Election between the Trump campaign and Russian agents as the reason Hillary Clinton lost the election. Then the infamous dossier came as proof, backed up by FISA court warrants that led to the Mueller Special Investigation and wreaked havoc on the lives of innocent men and culminated in the IG Inspector General’s report that found no wrongdoing on the part of the Trump Campaign and no Russia Connection.

During a 2018 speech former Vice President Joe Biden bragged about getting a Ukrainian prosecutor fired by withholding military assistance funds until it had been done. This speech was broadcast and available online and apparently seen in early 2019 by President Trump or members of his White House staff?

During 2019 there was “The July 25th Phone Call” between President Trump and the President of Ukraine where the President asked about alleged corruption by former VP Joe Biden to terminate the Ukrainian prosecutor investigating Burisma? Unable to control the President or stop his agenda and afraid his chances of reelection were too great this became an opportunity to discredit and embarrass President Trump.

With so much misinformation spread by deep state operatives and the media, and as evidence of corruption or involvement began to unravel concerning Ukraine and current and former US government officials it became necessary to “get the ball rolling” and attempt to influence the upcoming 2020 Presidential Election.

It soon festered into the ill-fated Impeachment Inquiry for Abuse of Power and Obstruction of Congress, neither rising to the level of Bribery, Treason or Other High Crimes and Misdemeanors as required by the Constitution.

Had real crimes been committed by the President, there would have been a vote by the full body of the House of Representatives on whether or not to begin an investigation to uncover/discover evidence and to interview witnesses. In accordance to the US system of juris prudence fact witnesses would have come forward with firsthand knowledge and/or written proof a crime had been committed. Hearsay and opinions would have been routinely dismissed as non-factual. The investigation phase when properly done would have taken quite a bit of time and skillful prosecutors would have insured that all the “I’s” were dotted and all the “t’s” had been crossed before making a recommendation to the Speaker of the House to advance Articles of Impeachment to the Senate. The vote would have to be non-partisan so as not to give the appearance of partisanship. Legislators with the appearance of a conflict of interest would have been sidelined from the proceedings. Additionally the President would have been allowed a full legal defense during the investigation.

From start to finish none of the proper protocol had been followed and the Articles of Impeachment were held by Speaker Pelosi for 33 days after a hasty partisan vote, before being publicly walked over to the Senate with TV cameras rolling.

During the trial phase the presentation by House Managers was nothing more than confusing talk and twisting of words based not on fact but simply to suit their own purpose. They alleged the President blatantly refused to cooperate with committee requests for witnesses and/or documents. They alleged that constituted Obstructing Congress by his willful Abuse of Power that went against the Constitution.

The President’s Legal Defense Team was quick to point out that proper protocol had not been followed in the House and as such any and all requests were not honored. There were certain officials and former officials of the White House who were covered by Executive Privilege and others who were called but not allowed to bring agency lawyers to the Committees with them and one who challenged in Court the validity of his subpoena, only to have it withdrawn by the Committee before the presiding judge could render a judgement. Thus procedures were not followed, jurisprudence not adhered to and the case presented by the House did not raise to the level of any crimes committed or even Impeachable Offenses.

Although the Defense Team was very clear in their presentation during the Senate vote on both articles it was purely a partisan vote (with few exceptions).

Article Two – Obstruction of Congress – 53 to acquit, 47 to convict

In my opinion members of the Senate exercised their right to vote on the Articles of Impeachment without considering the lack of criminal offenses or the legal defense of the accused, but voted instead based on party lines so as not to upset the balance of established power.

2020 will be known as the Year that Congress failed to properly or adequately employ the Impeachment Process in defense of the Constitution.

2020 will also be known as the year of the great awakening as voters across the nation realize the scam on America can only be cured at the ballot box. – I am the Real Truckmaster!