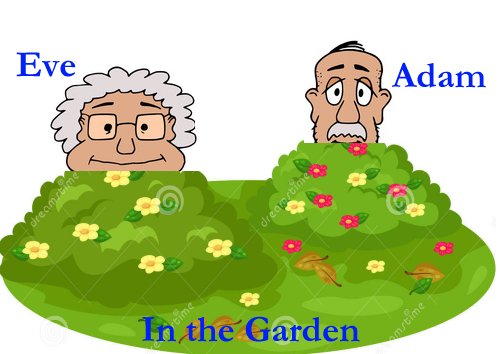 In the Garden – A Biblical Riddle – What If?

Genesis 2:7 – God formed man from the dust of the ground and breathed the breath of life into his nostrils and man became a living being.

Genesis 2:21 – 24 – God took one of man’s ribs and made a woman. Adam said she was bone of his bones and flesh of his flesh. She would be called “woman” for she was taken out of man. They became one flesh.

Genesis 2:25 – Tells us Adam and his wife were both naked, and they felt no shame.

Genesis 5:1 & 2 – We are told that when God created man he made them in the likeness of God, male and female and he called them “Mankind”.

I saw no record of how old Eve was before she died as Genesis recorded the names of the males of mankind and occasionally that of specific women.

Here is a riddle for you:

When Adam and Eve were created, at what human age were they? It would appear that they were what we consider adult aged people, right?

Hollywood has created movies about what it could have been like and they used actors to portray a handsome buff male as Adam and a curvy beautiful female as Eve probably in their early to mid-20s and it’s obvious that man’s imagination can run wild.

Since mankind was created without sin and the body was meant to last a lifetime is it possible that God with his wonderful sense of humor would have created them at say the age of grandparents (50s – 60s) or even older? Say man with a potbelly and woman with a mature figure?

The converse train of thought would be to create them as babies or teenagers and watch them struggle to raise themselves until they became the world’s first human parents. It would seem like a waste, wouldn’t it?

Up until the time of the flood men and women lived to be a ripe old age of 900 + years old and had sons and daughters.

After the flood everything changed and lifespans became much shorter. – I am the  Real Truckmaster!