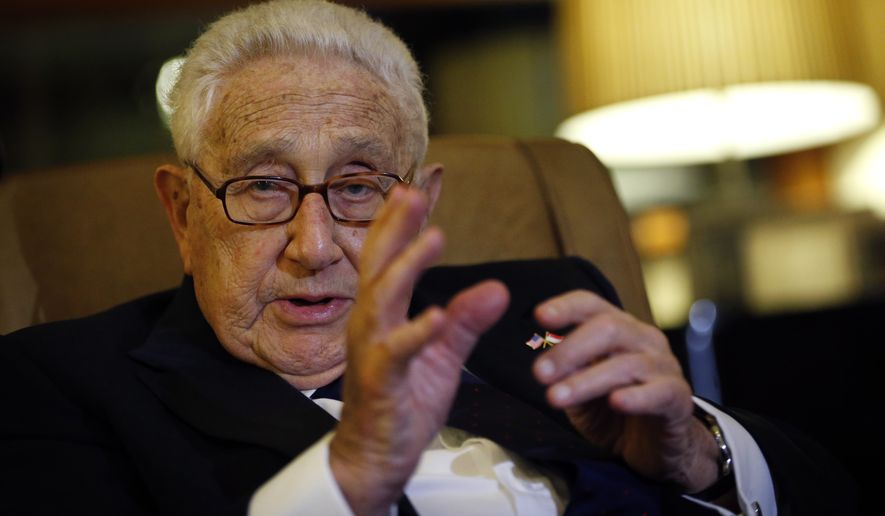 I did a check on Snopes.com and they reported this story as false, I guess the fake news folks at Snopes must have somehow missed this commentary by Dick Morris on February 9, 2018 that is now on Western Journal.

I’m going to insert my thoughts into this commentary which I fully agree with Mr. Morris. For those who have been following my Realtruckmaster.blog articles you know how I feel about President Trump and the constant character attacks from the liberal left. Those attacks have progressed into full on assaults on Trump Administration Cabinet Members, Trump supporters and our children who have taken a stand to honor Donald Trump.

I’ve watched as former Secretary of State Dr. Henry Kissinger traveled around the world representing the President of the United States putting boots on the ground for the U.S. Foreign Policy. So it should come as no big surprise as the 94 year old Kissinger, a longtime friend would give us a bit of advice when it comes to President Donald Trump and his foreign policy.

“Liberals and all those who favor (Hillary) Clinton will never admit it. They will never admit that he is the one true leader. The man is doing changes like never before and does all of it for the sake of this nation’s people. After eight years of tyranny, we finally see a difference.”

Then he goes on to explain how Trump is making it happen.

Kissinger knows it and he continues with: “Every country now has to consider two things: One, their perception that the previous president, or the outgoing president, basically withdrew America from international politics, so that they had to make their own assessments of their necessities. And secondly, that there is a new president who’s asking a lot of unfamiliar questions. And because of the combination of the partial vacuum and the new questions, one could imagine that something remarkable and new emerges out of it.”

Then Kissinger puts it bluntly: “Trump puts America and its people first. This is why people love him and this is why he will remain in charge for so long. There is not a single thing wrong with him and people need to open their eyes.”

Kissinger once explained that he and Nixon felt that it was important to convince Soviet leader Brezhnev that the U.S. president was unpredictable and capable of anything. Trump has held North Korea at bay and gotten China to accept sanctions on its people and companies that do business with Pyongyang by just such a strategy.

When he boasts that he has a “bigger red button” than Kim Jung Un does, he so transcends the mealy-mouthed rhetoric of the past that he forces a new recognition of American power.

Trump is discarding the inhibitions and call(s) the bluff on North Korea’s effrontery.

His point is that the contrast of American retreat under Obama and its new assertion of power under Trump creates a new dynamic that every one of our allies and of our enemies must consider.

They grew complaisant with Obama’s passivity and now are fearful due to Trump’s activism. And they must balance the two in developing their policies.

They realize that the old assumptions, catalyzed by Bush 43’s preoccupation with Iraq and Obama’s refusal to lead are obsolete. So, Trump is forcing a new calculus with a new power behind American interests.

Those — here and abroad — who rode the old apple cart worry about its being toppled.

But, as Kissinger so boldly states, Trump “is the one true leader” in world affairs and he is forcing policy changes that put America first.

Dick Morris is a former adviser to President Bill Clinton as well as a political author, pollster and consultant. His most recent book, “Rogue Spooks,” was written with his wife, Eileen McGann.

I’ve watched Dick Morris over the years and he is more experienced in White House political affairs than I could ever hope to be. His ability to make an accurate assessment of previous presidents and their foreign policy decisions while assessing the present administration is priceless.

If patriots (left, right, and center) would stop the infighting, name calling and public bickering and come together to solve the many problems and issues we have in this country, and the world, there is nothing that we could accomplish.

Case in point: We have homelessness; we tolerate wide spread abortion in America by calling it a
Woman’s right to choose”; we have massive substance abuse problems; still no cure for cancer; and intolerant political hatred, yet we fight to justify or condemn those who strive to gain unlawful entry into the United States?

We attack our law enforcement officers who put their lives on the line in our behalf? Our children emulate us and want to be just like us when they grow up, so our society bullies them until their “American Dream” is nothing but a nightmare.

Elementary school kids dress up as their favorite super heroes: military, political or law enforcement, and they are ridiculed by other students, castigated by teachers and school administrators and expelled for daring to recognize the President of the United States by dressing as him on a super heroes recognition day.

Have you not heard the old saying, “Don’t bite the hand that feeds you”? Intolerant Americans are like the neighborhood tree trimmer who climbs out on a limb, then proceeds to saw it off between himself and the trunk.

The old America of intolerance is dead. It’s time to bring back good fashioned common sense. It’s time to use that “noodle between the ears”. – I am the Real Truckmaster!