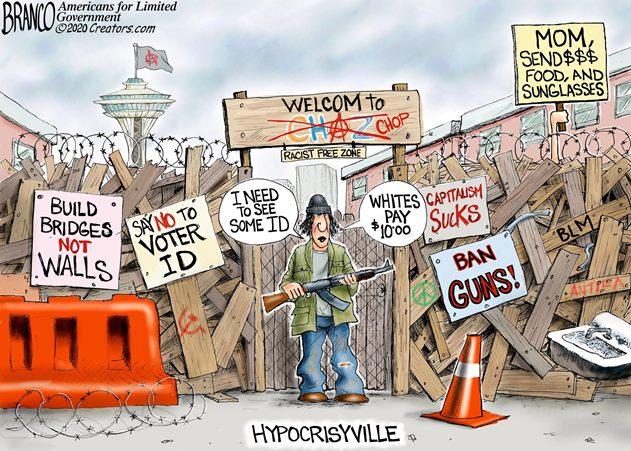 Be Careful What You Ask For

You have this friend or family member who’s always complaining about everything or nothing. How many times have you said, “Be careful what you ask for, you might get it”. After it happens you say, “I told you so.”

Seattleites have been stirring that pot for a while now and wouldn’t you know it, after a bit of rioting, looting and defacing public and private property the mayor has given the keys to the center of the city to a group claiming 6 blocks of the Capitol Hill area as their own. There were no discussion or terms and business owners and residents alike found themselves smack dab in the middle of the Capitol Hill Autonomous Zone (CHAZ). Barricades and wooden make shift barriers were erected all around the area no longer part of the United States. Lawlessness and disorder went under the supreme control of a rapper and his team of special forces commandos armed to the teeth and demanding no entry for police and photo identification for those deemed essential or claiming residence inside.

So brazen and unchallenged by local law enforcement they changed the name to Capitol Hill Occupy Protest, but then Capitol Hill Organized Protest (CHOP) sounded better. After a week text, tweets and phone calls home could be seen and/or heard for mommy to bring money, food and toiletry items. It would seem their blockade was working better than they thought, only on themselves.

I can’t help but wonder why the mayor ordered the abandoning of the SPD’s 3rd precinct and has made no attempt to interfere or insure the safety of the citizens of Seattle. Even the governor has been silent on this issue giving the sense of supporting this lawless act as if it were spring breakers raising havoc in Southern California or somewhere else instead of Seattle.

Surely President Trump could order the activation of the Washington National Guard to squash these squatters and urban vandals? Or maybe a local SF unit from the Fort Lewis/McChord military base in nearby Tacoma could restore order in less than 30 minutes or less? But maybe he’s having a good laugh and watching CHOP slowly self-destruct……maybe?

A few days ago I saw that CHAZ was demanding that the mayor or somebody would stop the Bikers for Trump who put them on notice they were coming to reclaim the Capitol Hill area. Was it because there were not enough game controllers to outfit the entire CHOP SWAT TEAM? I read another article from a proud CHAZ participant who left his tent to wander through the area marveling at what they had accomplished. He returned to his campsite only to find himself a victim of someone else’s greed. His money, laptop and other valuables had been re-appropriated by someone more needy (& greedy) than he. The response to him was basically that’s what we’re about so get used to it.

I don’t recall hearing anything out of the mouths of Democrats in Capitol Hill or locally in CHOP? So will somebody please change the channel? – I am the Real Truckmaster!