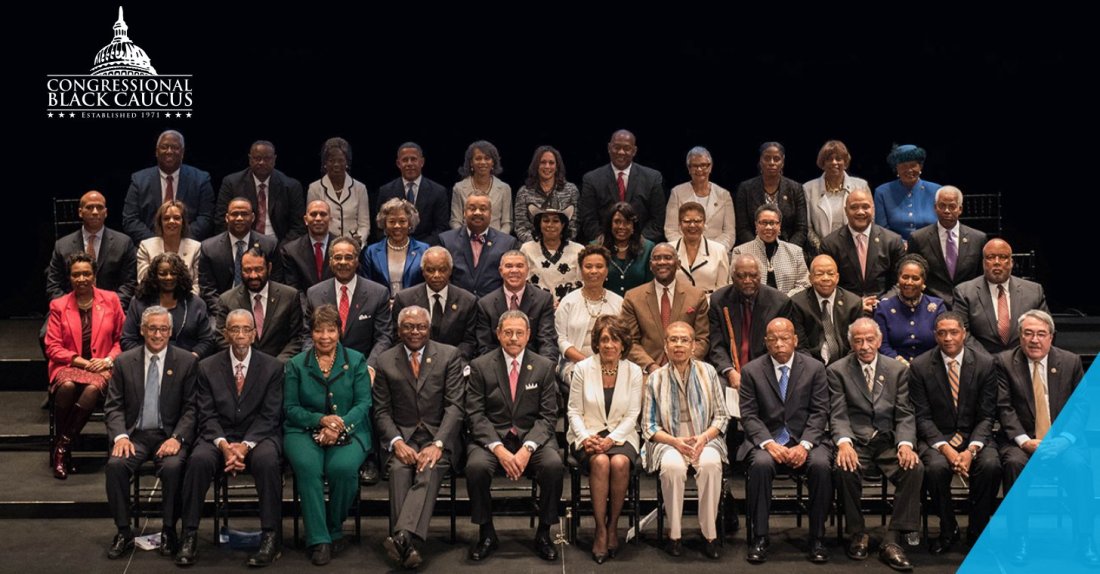 The smoke screen over America has covered the underlying causes of what’s happening across this country. The nation is in turmoil, demonstrations and rioting are organized chaos, and under the guise of promoting and helping ALL AMERICANS the primary focus comes from select members of congress who feel that they and they alone are the conscience of America.

How many of these are actively part of our US Congress?

If you said the Congressional Black Caucus you are correct. From what they have on their official website they claim to promote “Expanded Access” to all sorts of social, societal, educational, and welfare programs aimed to make life “better” for ALL African Americans, which makes them a racist organization.

Not only a racist organization, but an organized “hate group” or “Congressional Bully Group” where they have decided to direct their agenda against a sitting president and his current administration.

“Since its establishment in 1971, the Congressional Black Caucus (CBC) has been committed to using the full Constitutional power, statutory authority, and financial resources of the federal government to ensure that African Americans and other marginalized communities in the United States have the opportunity to achieve the American Dream. As part of this commitment, the CBC has fough for the past 46 years to empower these citizens and address their legislative concerns by pursuing a policy agenda that includes but is not limited to the following:

For the 115th Congress, the CBC has a historic 48 Democrats and 1 Republican members of the 2 Delegates, 46 Representatives, and 1 Senator, representing 78 million Americans, 24 percent of the total U.S. population, and 17 million African-Americans, 41 percent of the total U.S. African-American population. In addition, the CBC represents almost a fourth of the House Democratic Caucus.

While the CBC has predominately been made up of members of the Democratic Party, the founding members of the caucus envisioned a non-partisan organization. Consequently, the CBC has a long history of bipartisan collaboration and members who are both Democrat and Republican.

Since the election of Donald Trump, they have focused their entire effort on denouncing and blocking presidential actions and compiling the following list:

This list is only the tip of the iceberg for a group that is in bed with Louis Farrakhan and the Nation of Islam racist’s practices as a model to be followed?

Their claim is to “expand access” for African-Americans to all areas of society and the American Dream, while they denounce anyone else as having ties to racially motivated hate groups while they are a defacto hate group. Their entire website condones and promotes divisiveness not unity.

Are they not the pot calling the kettle black?

They are an “organized mob” made up entirely made up of African-American Congresspersons from both political parties and have even refused a membership request from a congressman because he was white.

This reminds me of the Chicago era of Al Capone and Bugsy Segal and company of the 1920’s at a time where organized mobs ruled the streets and neighborhoods of Chicago. In New York City it was the neighborhood gangs and street hoods to held mom and pop businesses hostage until they paid protection money.

This CBC has actively infiltrated the U.S. Congress in such a manner that both political parties of our Congress have been corrupted almost beyond repair.

One has only to look at the faces of the CBC to see the organized chaos that permeates the news articles and airwaves, even the internet. Today it is 49 members of Congress who set themselves above the law (and they are the law writers).

They were in bed with Barack Obama, who joined the CBC as a Senator from Illinois, and as President they were invited to the White House and given credibility.

The CBC says one thing, but their actions and disregard for the U.S. Constitution convey a completely different message. They say they represent American citizens, while they give preference and their full attention to illegal immigrants.

The CBC says that voter suppression is a problem, but said nothing as Black Panther members “loitered” outside polling places intimidating voters during the 2016 election violating federal law.

The CBC is against voter ID, saying it is discriminatory to require voter ID in the state of Texas, but have no problem encouraging illegal immigrants to vote in upcoming elections, also a violation of federal law.

The CBC wants to stop the war on drugs, as if that is going to keep drugs off the streets will make the deadly drugs just go away?

The CBC wants to uphold affirmative action in colleges and universities, rather than challenge and encourage young people of all races and backgrounds to help themselves strive for an education that will prepare them for life after college. The CBC wants African-Americans to get high paying jobs without proving themselves in the work force.

The CBC wants to hold police accountable, while saying nothing about holding individuals accountable for their actions (it’s not my fault) and blaming society.

The CBC is against a Muslim Ban, but cannot differentiate between legal Muslim immigration versus an unvetted Muslim takeover by the very people many Muslims are coming to America to get away from. Sharia law in America is against the very principles of the U.S. Constitution every legislator is sworn to uphold and defend.

The CBC is against Mass Deportations, but willingly and vocally supports the “Dreamers” of DACA, which are here illegally, and overlook crimes and watch as “sanctuary cities and states” are created as safe havens for criminals which violate federal law. American’s are dreamers too!

The CBC wants to maintain civil rights enforcement across federal agencies, while the CBC (members of the legislative branch) is unable to come together and write legislation that will make things better for ALL Americans.

Lastly the CBC criticizes the Trump Administration for not protecting Americans and the Nation from White Supremacists, as they openly support Black Supremacists movements (Black Lives Matters, Nation of Islam, and Muslim Brotherhood – all terrorist organizations as are the CBC in my opinion). Every attempt by President Trump to secure our borders and reform immigration has been met with hard line resistance from the CBC and members of congress.

It’s obvious to me that  there is a pronounced connection between these activists groups, and that the American people as a whole have been hijacked with the call of free housing, food, healthcare and no personal accountability or responsibility.

The Congressional Black Caucus started in 1971 and since that date have made it their purpose to enrich the members of congress that become entwined in their organization. Their stated purpose is to use the resources of the U.S. Government against itself. Why not use their own finances or conduct legal fundraising to support their efforts to disrupt the current administration?

Every member of the CBC should be removed from office or forced to resign because they are clearly not looking out for the American voters whom they claim to represent. This warrants a DOJ investigation into the agenda and actions of this very racist group. – I am the Real Truckmaster