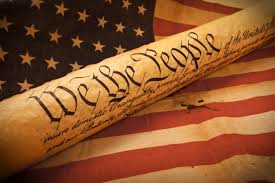 Let’s say you have land and want to build your new dream house. You have a floorplan, building permit and a contractor. Now that you’re ready to build where do you start? Naturally you’d start with a foundation.

If Democrats were builders they would have you to believe that you don’t need any of that, all you need is a “want to” and the only thing that matters is the “want to”. You don’t need rules, those you can make up any time and change them on a whim and since you’re the only one who really knows best what the people need, and they don’t matter but are only needed to provide the funding. That is how democrats approach the United States Constitution.

The United States Constitution is the foundation of this nation. It is the Rule of Law that is the blueprint for law and order. When someone attempts to inject their personal “Want To” into our society it must be measured against the Constitution and without it we are just another third world country or worse yet our country is no more. Let that penetrate for a moment. Let it sink in.

Many have mis-categorized our country as a democracy which is run by a tyrant. Which we are not, the United States of America is republic, more correctly a Constitutional-Republic. We are a republic which is guided by a constitution and our nation is the only one of its kind in the world. We are the shining light upon the hill as President Ronald Reagan once talked about.

When you hear those on the left spout nonsense about open borders, unfiltered immigration, laws don’t matter (unless you’re a conservative or a republican) what you are hearing is garbage aimed at making the Constitution irrelevant in an attempt to remove our government, and forever change our way of life.

That may sound great to the uneducated, misinformed and socially outcasts who act like 2 year olds throwing a fit. That is why the millennial movement appealed to so many of our young people who thought back to the days of free love or the anything goes hippy movement of the 1960s.

They have bought into the free stuff generation where the government gives you food, phones, housing and medical and it costs you nothing because it’s free. This same generation is obliged to stay seated or kneel before the flag and the national anthem; to them it becomes a badge of honor. There is nothing honorable about dishonor!

Let me insert something here about honor. Honor is earned, not given away freely and freedom isn’t free. Unless you have taken the oath, served in the military, overseas or on the field of battle you will never understand the price of freedom or liberty until it is taken away from you.

To truly understand go to a federal prison, go inside and see the inmates who are locked up, talk to those serving life sentences and ask them, “What is the price of freedom”? Or go visit a Mexican prison; look at the squalor, the cells and the number of people in each one. Look at their faces, hear their cries. Listen to the cries for freedom.

Our men and women in uniform have taken an oath to protect and defend the Constitution of the United States against ALL enemies, both foreign and domestic. That means for us we will defend the Constitution for you our fellow Americans and if necessary against you or anyone who attempts to render it useless or irrelevant. We will stand in the gap for liberty and for freedom! Our oath is before the God who created us and by whose help we ask in upholding it. Unless you have stood by our side, in our boots and worn our uniforms you cannot know the ultimate importance we place upon that Constitution you consider so disgusting.

Show me one single country where one has the freedom to protest, yet the built in guarantee of the ability to change the government should it become tyrannical? Show me any other country where simply voicing your opinion publicly against the government or its leader will not land you in prison? Go to places like Mexico, Haiti, Venezuela or Cuba or even North Korea and see for yourself how the will to survive is everything and all for the ability to live freely and to have liberty.

One thought on “Why the Constitution?”