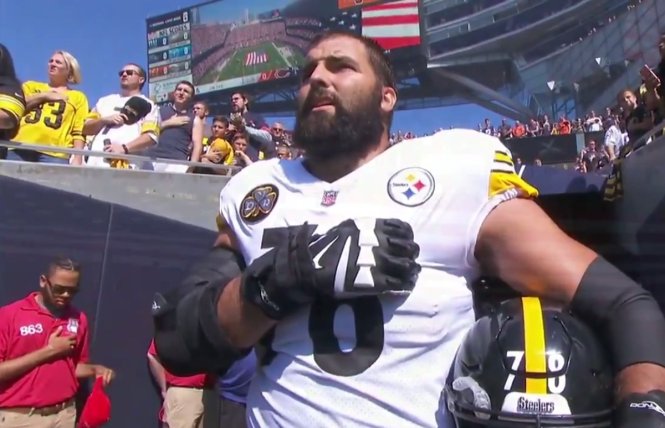 So one man singlehandedly sacrificed for social injustice? Yes, but it wasn’t Colin Kapernick. One year ago one man #78 Alejandro Villanueva of the Pittsburgh Steelers took a stand for what he believed in and as a result was publicly and repeatedly shamed while others were unable, unwilling and afraid to do so and became an embarrassment.

This former army ranger was one and he alone came outside to honor the flag and the national anthem. I would expect no less from a combat hardened Bronze Star Captain who was shamed until he publicly apologized on camera for standing his ground?

Oh it could have been easy to go with the flow, follow the crowd and act like everyone else, but it takes someone with intestinal fortitude to stand on your principles because it’s the right thing to do.

Colin Kapernick on the other hand publicly took a knee during the national anthem to protest social injustice?

Taking a knee during the national anthem WAS and IS disrespectful and when the president weighed in on this matter, the entire NFL, team owners, coaches and players have collectively taken a knee in support of Kapernick? That was not sacrifice by any standard.

Addressing social injustice is setting a positive example, going into the community to educate and discuss ways and means of ending the injustice would be a better way. I’m sorry but disrespecting the flag, the national anthem and the President of the United States is nothing more than a cancer to the soul of America.

During the past year what has occurred is a cancerous movement that has grown to include school sports programs, resistance to traditional American values.

The real social injustice is when one segment of society self-identifies with racially charged rhetoric and attempts to exact social bullying tactics in order to prevent their own betterment. What is happening in cities across America are gangs freely roaming the streets terrorizing innocent people with looting, shooting and running amuck. Rather than address the root cause and formulate solutions, it is better to resist and attack the police as if that will make things better?

What is missing in this equation is man’s need and dependence upon a loving and merciful God. Try as he might man is the problem, not the answer. Jesus alone is the answer to the sinful problems of man.

2 Chronicles 7:14 “If my people who are called by my name humble themselves, and pray and seek my face and turn from their wicked ways, then I will hear from heaven and will forgive their sin and heal their land.”

We must turn from our wicked ways, fall down on our knees and pray and as a people call out to Almighty God once again for deliverance.

I am reminded of the story of an injured man trapped on a rooftop during a flood. He prayed to God asking for help. Soon a helicopter came overhead but he wouldn’t budge. Later a small boat came by and still he wouldn’t budge. Finally the man succumbed to his injuries. Then he asked God, “Why didn’t you help me?” God replied that he sent a helicopter and a boat but the man refused the help.

Our nation has been crying out to God for help. Now we choose to ignore the help because we don’t like the messenger? Go Figure! – I am the Real Truckmaster!