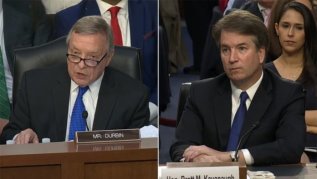 Can you see it now? It’s as clear as the nose on Senator Chuck Schumer’s face. All the posturing and politicizing of the Kavanaugh SCOTUS nomination hearings are for naught. The Soros funded obstruction, the circus atmosphere and the demands that POTUS has eagerly submitted to are simply ploys in this game of the swamp.

When Schumer says after the midterms the Democrats are going to revisit the SCOTUS hearing process, Senator Diane Feinstein says “a week isn’t long enough, we can’t think that fast” and Cory Booker loses his cool and blurts out that “FACTS DON’T MATTER” it’s clear that the congressional Democrats have let the proverbial cat out of the bag.

The delay tactics are simply a sham and now it’s plain as day that the Senate Majority Leader must issue a “Call to Gavel” and vote to confirm Judge Brett Kavanaugh without any further delay. It would be wise for the Republicans to revisit the SCOTUS nomination hearings process in order to prevent all the delay tactics of the left. The Constitution is clear in that the President has the constitutional authority to nominate SCOTUS candidates and the Senate has the obligation to confirm and consent. The hearings are unnecessary. Senator McConnell must now take the gloves off and clear the ring so that senatorial business can be conducted without further delay.  Since the Democrats are acting like hungry little birds, chirping for more worms, more worms and more worms. It might also be advisable for the senate to begin seriously censuring and reprimanding some of these wayward senators for misconduct, possibly with overtones of impeachment and removal from office.

I can tell you this much that due to all the flack being stirred up by the liberal left it is perfectly clear that President Trump is the right president to select Judge Brett Kavanaugh who is the right man for this SCOTUS appointment.

I applaud President Trump for standing firm on his nomination of Judge Kavanaugh and I look forward to his participation on the bench of the SCOTUS. – I am the Real Truckmaster!