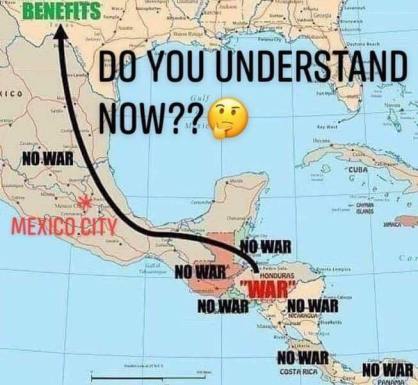 Look behind the scenes and forget about the political posturing over these so called asylum seeking migrants and the Trump administration’s refusal to simply let them in. By now it’s clear that this was an orchestrated “invasion” attempt by 3rd and 4th parties of undeclared origin whose only purpose was to take unfair advantage of simple, ordinary people who want to raise their families.

Clearly there were those who are troublemakers and criminal elements with the intent of breeching a hole in American sovereignty and consisting of known MS-13 gang members and others who traffic in human cargo and drugs with the intent of getting on US soil to continue their unlawful enterprise.

We saw the assault on the border, with staged “events” using CS gas canisters from the Mexican authorities and trying to pass them off as having been lobbed by agents of the US border patrol.

Even as they were being formed up in Central America and prior to their trek northward, media outlets and reporters were beefing up the story of these poor immigrant families preparing to walk 2,000 miles northward to enter the United States. Along the way someone obviously thought calling it a walk for asylum was a good idea and heart wrenching.

Why would a people willing to work in the United States not simply go to the nearest US Embassy and apply for a work permit visa? There would be no disruption of life for families and no hazardous journey on the hopes of gaining entry. Children would not suffer along the way. Women would not face the threat of being raped or murdered at the whim of criminals. Fathers would not worry about having to defend their families from intruders or outsiders. This was a political stunt on the world stage, an effort to test American resolve see if the sovereignty of a nation would stand. I think it’s a dress rehearsal for something more intense in the making.

A universal law, whether written or not, calls for someone seeking asylum to do so at the first country they come to by showing proof of their fear of social, political or religious persecution. Those wishing to gain asylum in the United States would then apply at the nearby US Embassy. Those receiving asylum would be given documentation and possibly transportation to the United States where they would be assigned a sponsor, provided temporary assistance (housing, medical, job assistance, etc.) and expected to become productive members of our society and provided a path to citizenship. This process happens every day in America but is not something easily done in a day or two.

Those who are denied or turned down for entry have no “right” to combat any government over their laws or to claim they are being discriminated against. They must simply go home or try applying elsewhere.

What have happened in the United States are politicians who are willing to weaken national security because they don’t like the President of the United States because he threatened their power over the people, it then boils down to a power struggle.

“Even fools are thought wise when they keep silent; with their mouths shut, they seem intelligent.” – Proverbs 17:28

As the saying goes, “Even a broken clock is right twice a day.” Quotation Celebration

“The greatest lesson in life is to know that even fools are right sometimes.” – Sir Winston Churchill Quotation Celebration

As Forrest Gump would say, “Stupid is as stupid does.” Quotation Celebration

I like this one “A fool is totally unaware that they’re a fool. To thee fool, EVERYONE ELSE is the fool.” Quotation Celebration

Our nation is one diverse peoples and of blending cultures. We have more in common than we have apart. It’s like someone telling someone else to go back where you came from, an expression of outright racism. However if you carried that thought out to a logical conclusion you would see the fallacy in that, first we are all descendants of Adam and Eve who were in the Garden of Eden. God moved them out of the Garden of Eden and placed an angel in front of the entrance so that they could never return. But if returning was a possibility, I don’t see the Garden of Eden capable of holding the population of the world. So another quote comes to mind, “Can’t we all just get along?” – Rodney King

Coming to America is such a misnomer because America spans South, Central and North America. Most of the immigrants who came as a result of the “caravans” are Americans and were already in America. What they all wanted, for various reasons, was an opportunity to live and/or work in the United States of America. The vehicle they used was not the right one, nor was the path they chose the right one.

Before we can help anyone we must first learn to help ourselves. We have our own homeless and down trodden living and dying on the streets of America. We have entire communities living in despair.

“And why worry about a speck in your friend’s eye when you have a log in your own?” – Matthew 7:3

“Do not look down or judge anyone else, only God sits that high!” – Unknown

We are all drifting in the same body of water – Jesus is the life line! – I am the Real Truckmaster!