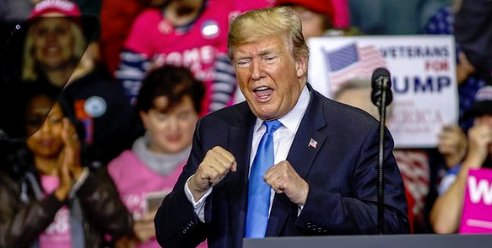 So Ironic Don’t You Think?

Just when you think you’ve seen everything. President Trump and his family have gone back into campaign mode just to peak interest in Republican voters and draw them away from their couches and televisions for a chance to listen to the president speak and say good things about the “Red” candidates as well as some comical things about the “Blue Wave” candidates accentuating the Tsunami that never happened. With more than a dozen rallies over the past few weeks where tens of thousands of Trump supporters have come out in droves, many being unable to even get inside the venue.

On the flip side I saw a posting on Facebook where Democrats are soliciting and offering $15 for people to show up for a Georgia rally on Friday November 2nd where former president Barack Obama is going to speak in support of the Democrat running for governor. The ad admits that attendance has been a bit low. How come Obama can list 83 Democrat candidates on a newspaper ad, but is unable to attract more than 43 people (body guards and maintenance workers included) at his last rally? It seems that when he speaks out in support of these leftist candidates, he spends much of the time talking about himself?

It appears that every new day brings a new way to disrupt and divide the American people just a little bit more. Alleged scandals, false reporting, inaccurate opinion editorials disguised as journalism and outright calls for “taking out” the president, and I don’t feel that Maxine Waters was going to treat the president to ice cream, unless it was Ben and Jerry’s new flavor “Pecan Resist” that hides their propaganda under the inside of the lid.

When President Trump speaks he always talks about bringing the country together as one, but I’ve never heard him speak about catering to the rich and famous or giving in to the demands of the ultra-left.

As we wind down these final 6 days before the midterm election votes are counted we must not forget that every citizen’s votes count. Those who stay home or refuse to vote are in fact voting in absentia by withholding their voice so that others might win.

Let us not forget our brothers and sisters in law enforcement and in the military who put their lives on the line EVERY DAY so that we can live in the land of the brave and the home of the free.

The will of our nation is about to be seriously tested over the next few days and we look to Almighty God to handle the details and to protect our men and women in uniform.

May God bless the United States of America – I am the Real Truckmaster!