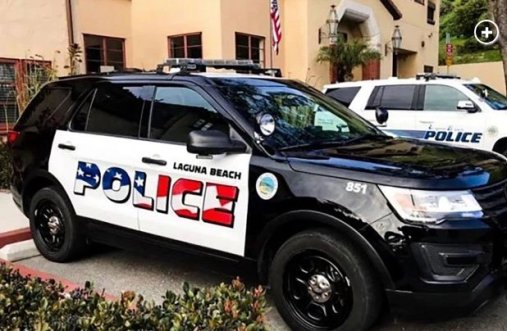 Un-American Versus Racist in the USA

There’s an age old saying “When in Rome do as the Romans do”, well this isn’t Rome! In fact this is the United States of America, the land of the free and the home of the brave, from sea to shining sea. Get the picture?

Take the April 16th 2019 issue in Laguna Beach, California where police vehicles were rebadged with Stars and Stripes Police logos and immigrants became fearful and offended at the logo because they say it’s racist. Others express legitimate concerns about violating the US Flag Code with the Stars and Stripes lettering.

For those who’ve served in the US military overseas seeing the Stars and Stripes flying high over a US military installation, a US Consulate or US Embassy evokes a strong sense of pride and patriotism. That same flag strikes fear into the hearts of our enemies who are committed to doing us harm.

If you were born here but have never served in the US military or traveled outside the continental United States you probably don’t understand. If your idea of going to a foreign country is going down to Texas, Arizona or California so you can cross over into Mexico to party on the beach or buy trinkets to impress your friends during spring break, you still don’t understand.

However if you migrated to this country from Europe, Asia or elsewhere because you wanted a better life for yourself and your family and you came across the border legally following the US immigration guidelines, obtained employment, an education and struggled hard to raise your children to grow up respecting this nation and what it represents to grab hold of the American Dream you know perfectly well why you came and you are forever grateful for the opportunity to be here and America welcomed you with open arms.

BUT, IF you came here illegally or to do harm you had better stop and take notice because this is not a nation where you can come in demanding anything and if you are offended and fearful because you see the Flag of the United States (the Stars and Stripes) waving in the breeze from a flagpole or a flag decal affixed to a motor vehicle – get over it! Choosing to be offended is a choice that you make because you are not willing to adjust to the laws of this nation. The time is passed when the so called “Offended Minority” has any say at all on what is right or wrong in their eyes. The cultural norms of your home country do not apply here. There is no recognized gang-style mobs ruling the streets and no Sharia Law authorized to operate within the United States.

The rule of law comes from the Constitution of the United States of America, Period and it is based upon the commandments and principles set forth by the Bible, not the Koran! If you are operating outside of US law you are wrong. Your actions are not constitutional and can result in your being arrested, detained and deported dependent upon your immigration or legal status and your unlawful conduct. If you have obtained naturalized citizenship it can be revoked and you can be deported and banned from legally entering the US. If you are a US citizen who has actively assisted the illegal crossing of non-citizens you may find yourself being prosecuted and facing fines or imprisonment for violating US Immigration Laws. It doesn’t matter who you are, if you reside in the United States you are responsible to honor the US flag, the National Anthem and for obeying ALL US LAWS!

No matter what the greatest legal minds are telling you, the Constitution protects the civil rights of US citizens and does not apply to non-US citizens. If you desire to obtain those civil rights you must become a US citizen. There is no other way!

The time is now for the abolishment of so called “sanctuary” cities and states and the chief administrator to be held accountable for the deliberate destruction of the society under their control. Public servants such as Mayors, state and city AG’s, Governor’s and even Judges do not operate outside the law. Members of political parties who sew discord and encourage or promote lawlessness are also to be held accountable for their actions, at least when elections come every 4 years. Voters must take a close look at the individuals running for political office and ask themselves some very important questions –

“Is this person representing ME in the State Legislature or at the Federal Legislature level?”

“Has the track record of this person benefited me or my community personally?”

“Do I feel confident that this person has MY best interests at heart?”

“Has this person kept their campaign promises?”

If you answered “NO” to any of these questions it’s time to reevaluate how you vote in the next election. Don’t simply go down party lines, but look at the individuals, listen to what they say they will do and how do they measure up with their past performances?

Don’t allow the media or Facebook to influence YOUR decision at the ballot box. Do your own homework and research the candidates, listen to them speak to understand whether they can deliver on those promises. Politicians who promise the moon and deliver nada are to be shunned.

The uninformed voter is not only a liability to the nation but to themselves. Knowledge is power and ignorance is bliss. If you don’t stand for something you will fall for anything! – I am the Real Truckmaster!