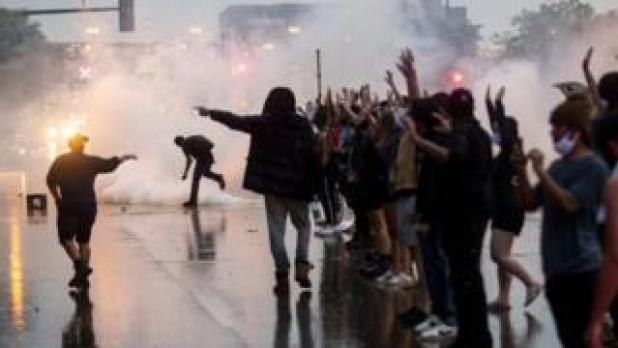 There are pictures circulating on Facebook that depicting 13 of those arrested in Portland were of public school teachers. I don’t know how valid or accurate that picture was so I didn’t use it. However it got me to thinking that if 1 teacher in 1 public school taught for 1 year or more having inserted communistic, fascist or anti-government babble into their classroom or into the school curriculum how many exponential future fascistic children would be running around with that stuff swirling in their heads?

If you go back to the anti-war protestors of the 1960s – 70s I’m sure there are a number who are now college and university faculty, adjuncts, teachers, professors, administrators or deans. Fast forward to our present day prestigious colleges and universities and you see the most anti-American, anti-government and anti-social behavior of their students and alumni.

American families have been lulled into thinking that our children must get an education to be successful in life. Jane and Johnny are sent away to “summer camps” for 4 years or more and expected to come back with a diploma and as a seasoned and highly successful member of society.

What happens at college is often far from an optimal educational setting and Jane or Johnny get caught up in the party scene of a 4 year “spring break” mentality, their advanced degree in “the mating call of the butterfly” has led to massive debt, no job prospects but individuals primed and ready to do something – anything. They are too “smart” for fast food, yet too dumb and without any real job skills and living in mom and dad’s basement playing video games that are geared to fighting an apocalypse where destroy everything is called winning. You use up all your ammo, wait or hack into the supply chain and refill your ammo supply. You die and simply restart as a new yet smarter fighter – you have become a super sniper.

An ad on social media is for snipers going up against “the man” and zing – you now have a mission. The problem with this new “job” is that it’s not a video game and the stakes are real, as are the consequences. Meeting up with other likeminded individuals out after dark, lurking around and waiting for that target of opportunity or the command from higher to attack to destroy, burn and attack some more is too much for the average “spring break” graduate to resist. Businesses and buildings are destroyed, set on fire and anyone in range is a target. When the police show up its “attack the police” for they are bad.

You think it’s a bit far-fetched? Think again. Someone is putting up big bucks to orchestrate the types and frequency of the rioting we are seeing in cities across the nation. The logistics of arming and moving an army is no small task. It takes coordination and lots of money. To move that army across state boundaries is a tremendous undertaking and it is also against the law if your purpose is to cause mischievous or conduct a full-fledged riot. There must be political connections. There must be coordination of effort, food, shelter and weaponry and all that cost money. I say follow the money.

The immobilizing of law enforcement must come from the top down. That means either somebody in DOJ, HLS; state or local agencies must be involved. What we know today is that all things are political due to the upcoming presidential election. We have heard very little to nothing of substance coming out of congress or by state and local officials who blame it all on President Trump.

Well here’s a news flash. This has nothing to do with President Trump, but it has everything to do with American’s who continue to vote in politicians who have no vision of a better country, but promise more free stuff for everyone. “Don’t worry we’ll tax the rich and they’ll pay dearly for it. Take from the rich and give to the poor”, sounds a lot like Robin Hood doesn’t it? It’s been tried and it doesn’t work. Not even scratching or winning on a lottery ticket can make you come out a winner. When it’s something for nothing, you usually end up with nothing.

Do you want to be a winner? Stop listening to losers (See that was easy). Hard work, dedication, and attention to detail, invest yourself in your work and do your very best at whatever you do. When you win, America wins. – I am the Real Truckmaster!